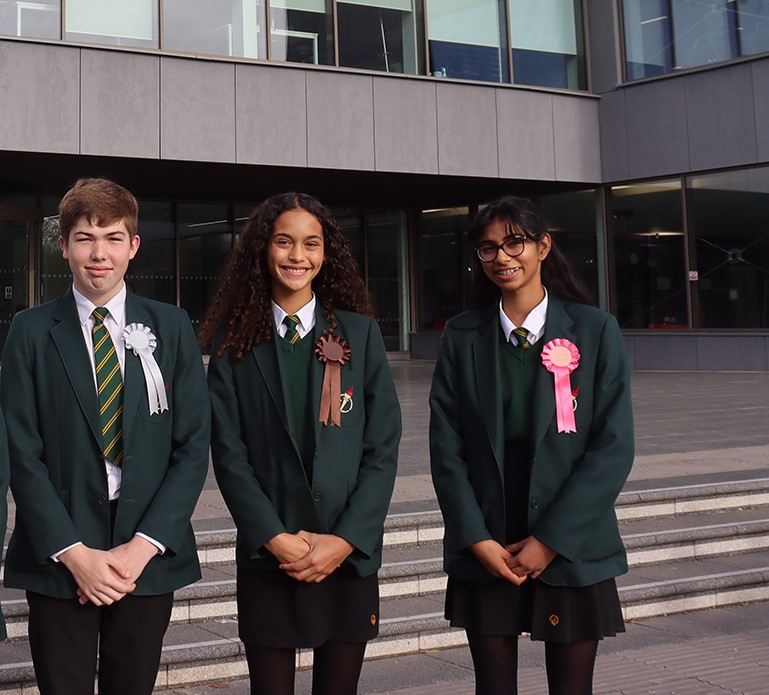 A group of Year 10 students visited Rushcliffe Arena in West Bridgford on Monday the 8th of November. Here’s a summary of the visit by two students.

"The purpose of this trip was to inform us young people about local government and how the voting system works. Before introducing the core activity, there was a talk on who are Bingham’s government and on how democracy works. The activity was a hypothetical situation where four students became candidates running to be a part of our government, and the others had the opportunity to vote for one of them. I had the opportunity to be one of the candidates. Overall, the experience was fantastic and would be something to remember. We learnt about the importance of government and what it would be like to vote in real life, which is very important because as someone that doesn’t do Citizenship, it is something everyone would know before being able to vote. This was an amazing experience that has made a real impact on my knowledge on politics."

"The government and politics trip was fantastic. While there we were taught about the importance of voting and ran a fake campaign with four candidates all designated to a random party named after a colour and given a manifesto for the party. It was the candidate’s job to speak about their policies, answer questions and go round the tables introducing themselves and trying to win the vote from the people. It was such great fun and the experiment was very useful to see what it’s like to vote and like to run a campaign. The people were so lovely and the trip was very enjoyable- I had a wonderful time!"

Sounds like it was a lot of fun! I'm sure we will see our students in Bingham's local office in the future.