Phoenix Weir heading towards becoming the next Olympian! 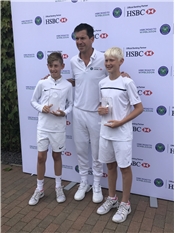 In the last year, Phoenix has competed for Great Britain against France and also travelled to Croatia with the Great Britain team to compete in two tournaments there. He won the Road to Wimbledon doubles competition last summer and also got the semi-finals of the singles there in the 12U category. At the National level on the domestic scene he is currently ranked number 5 in Great Britain and has had success in singles and doubles at tournaments in Bath, Sunderland and Nottinghamshire this year.​

​Most recently Phoenix's parents entered him into a Liverpool Tennis Europe tournament but he was very far down the acceptance list. Due to his performance in the most recent 14U National the GB team gave him a ‘wildcard’ into the main draw.

​That meant Phoenix was able to play from Monday 12th November until he was knocked out. Phoenix had a fantastic tournament and managed to win his first singles and doubles match on the first day. He played a very experienced French boy in the singles and won 6-2,6-2 and then won the doubles with his Scottish team mate, 6-3,6-4. The next singles round was the following day where Phoenix came up against no.3 seed. Unfortunately he was knocked out, despite getting a match point. However the tournament was not over for Phoenix....

​Together with his friend Ben, Phoenix did get through to the semi finals in the doubles which was played on the Wednesday.

​His family have been so proud of Phoenix commenting "We have been delighted with this success as some of the boys are year 10 and much bigger than himself."

Another result of his performance during October half term has meant that the GB team have given him a place in the 14U National camp at Roehampton (London). To be invited to the National camp has been an honor for Phoenix as it is very competitive for only a few places available.​

From Toot Hill school we would like to say a huge congratulations to Phoenix of his progress so far and for continuing to manage such a busy schedule with training and school work - we have faith you will be the next Olympian! ​